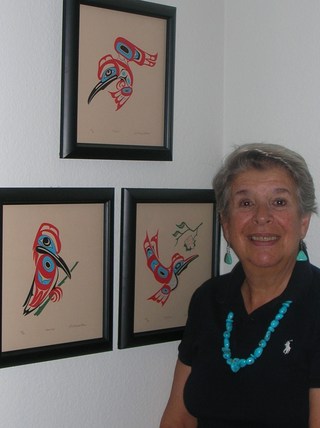 Cathy Robbins: Northwest art on the wall, Navajo art around her neck. (Photo by John Romano)

And in 2000 libraries across the planet (WorldCat)

All Indians Do Not Live in Teepees (or Casinos) began after we moved from New York when my husband, with a fresh Columbia PhD in history and took a job at the University of New Mexico. My degrees were in English--not all that useless, because I started working as a journalist a couple of years later.

I was the typical New Yorker. Indians were part of that terra incognita west of the Hudson--far west--although I had intimations of people named "Mohawk," "Seneca," "Cayuga" etc. from my native New York State and from Saturday cowboy-and-Indian matinees (you know who won).

That nonsense changed after some time and especially after my work as a staff and freelance journalist took me into a different West. The stories I wrote served as the platform for All Indians Do Not Live in Teepees (or Casinos). To them, I added more interviews, research, and travel.

As a reporter, I covered stories in many areas--the arts, politics, business, even gardening. But my favorites were those about American Indians. Wherever possible, I grounded those stories not in "issues" but in individual Indians. In Teepees, you will find many of the people I met and wrote about: doctors, scientists, city dwellers (because most Indians no longer live on reservations), broadcasters, museum curators, painters, composers, tribal officials, medicine men, archaeologists, and more. Because each story was about a person, each was an adventure, and I have worked hard to communicate to you the same thrill of human connections.

The New York Times, the Albuquerque Journal, www.voiceofsandiego.org, and High Country News are some of the places where these stories appeared.

Over the years, I had a personal guide--someone who worked for me and became a friend. She and her family introduced me not to "Indians" but to a way of thinking about Indians. Gone forever was the idea that they were a monolithic group. I learned quickly that the Indians nations, tribes, and bands were as different as European groups. They had a few commonalities--some basic views of Nature and the cosmos. But the more than 500 American Indian groups are a rich collection of languages, arts, cultures, governing styles, songs.